Modern engines have many sensors that are designed to monitor their performance. The MAF, or rather the Mass Air Flow sensor is one of these sensors that’s tasked to measure the amount of air getting into the engine manifold. Now, just like any other component, the MAF is likely to get layered with dirt, dust, oils, and other debris that can compromise its performance. So, to avoid sending the wrong information to the engine’s computer, the best mass air flow sensor cleaner alternative can really help to troubleshoot this problem.

Since the MAF is among the most crucial sensors in any engine, this guide will discuss exactly how you’re supposed to clean it using rubbing alcohol. We’ll also discuss how you can clean the MAF sensor using electrical cleaners and a MAF sensor cleaner.

But first, we’ll discuss what a MAF sensor really is and what is its role in your car’s engine. So, if you’re ready, then let’s begin.

What is a MAF Sensor? 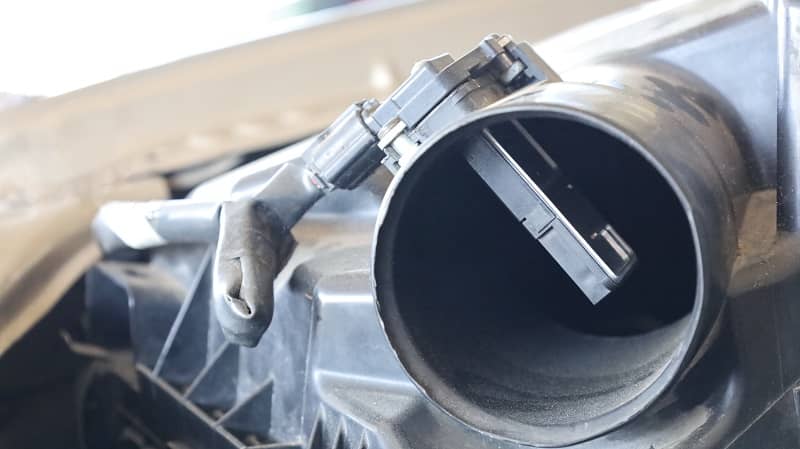 How Does a MAF Sensor Work?

The main reason why we’ve followed these specific steps is to help you understand what causes a MAF sensor to fail and why cleaning it is critical to your engine’s performance. Now, the MAF is located in an intake pipe that’s fitted between the air filter and the engine’s intake manifold. Its purpose is to measure the amount of air getting inside the engine.

To do this, the MAF comprises of two airflow sensors that are mounted on the path of the airflow. These are the hot wire and the cold wire. The hot wire consists of a thin platinum wire that’s mounted on the path of airflow. This wire is heated using an electric current to remain hot. Next to the wire, there’s a temperature sensor that monitors temperature fluctuation near the hot wire.

Now, when the engine is idle, a small amount of air flows through the manifold meaning less electric current is needed to keep the wire hot. However, when you press the gas pedal, the throttle automatically opens forcing huge amounts of air to pass over the hot wire.

Since the wire is expected to cool down, more electrical current will be needed to heat the wire to keep it hot. During this process, the temperature sensor translates this electrical current into digital data that are sent to the engine’s computer known as the PCM (Powertrain Control Module) or the EUC.

From there, the engine’s computer uses this data to calculate the amount of fuel that’s needed to keep the engine running. In other words, it helps the computer to determine the correct air/fuel ratio.

In addition to that, the PCM uses this data to predict the perfect shift points of automatic transmissions. This is the main reason why the hot wire principle is used in most modern vehicles.

What Causes the MAF Sensor to Fail?

Since the MAF is located on the path of airflow, it’s directly exposed to the air getting into the engine manifold. When driving, a huge amount of air is sacked into the manifold. Most of this air has potential contaminants such as dust, dirt, fibers, and debris that can get into the MAF to alter the readings.

Most car models such as BMWs, Toyotas, Volkswagens, and Mazda can take you around 18,000-25,000 miles for such contaminants to occur. However, smaller vehicles, especially those with smaller engine bays, can take a shorter time to clog as there’s less room for oil vapor and combustion debris to escape.

A failed or a contaminated MAF sensor cannot measure airflow correctly. This can send misleading data to the engine’s computer causing it to miscalculate the amount of air injected into the engine’s manifold. As a result, this can cause a number of noticeable symptoms.

How to Clean a Mass Air Flow Sensor

Now that we’ve discussed some of the common symptoms of a clogged or faulty MAF sensor, this guide will now shift its focus to the main topic of the day which is alternative ways to clean the MAF sensor. Here, we’ll basically discuss at least three alternative ways you can consider to clean your car’s MAF sensor.

Start by parking your car on level ground then turn off the engine to allow the car to cool down. If you’re worried about your safety, then you can proceed to disconnect the negative battery terminal to avoid an electric shock.

When you’re done, locate the MAF sensor. According to most car models, the MAF sensor is located under the hood behind the air filter. In case you’re unable to locate it, then you can consult the car’s manual.

Now that the MAF sensor is at your disposal, pour isopropyl alcohol inside a plastic bag then insert the MAF sensor inside. Shake it gently for two to three minutes then leave it for half an hour. This will allow the alcohol to clean the MAF sensor parts thoroughly.

An alternative method is to pour the isopropyl alcohol inside a spray bottle then spray the MAF sensor gently. In case you pick this method, you need to cover the hot wires and the plate to avoid damaging them. Also, do not touch or scrub the wires whatsoever as they’re too delicate.

Once you’ve cleaned the MAF sensor, place it on a dry towel then locate it in a secure place where it won’t be knocked over. Give it at least an hour or so to dry before reinstalling it. Always make sure every part is fully dry before putting it back to avoid giving false readings that can damage the engine.

Other than using isopropyl alcohol, an electrical cleaner such as CRC Electronic Cleaner can be used as an alternative to clean your MAF sensor. The best thing about electronic cleaners is that they work the same way as MAF cleaners without leaving any residues behind.

Remember, the worst thing that can ever happen to your MAF sensor is to have residual leftovers on the hot wires. This is dangerous as it can burn the thin platinum hot wire on the MAF sensor leading to permanent damage.

So, if you’re using an electronic cleaner, then you can pour it inside a spray bottle then follow the same procedure we’ve highlighted above. Although electronic cleaners are perfect alternatives, there’s no need of using them if you’re in a position to get a MAF cleaner.

Although isopropyl alcohol and electronic cleaners can do a great job of cleaning your MAF sensor, using a MAF cleaner is by far the safest and most effective way you can clean your MAF sensor. The best thing about MAF sensor cleaners is that they don’t contain any harmful chemicals that can leave residues behind.

Remember, once residues are deposited on the hot wires, this can lead to permanent damage to the MAF sensor, which is not something you’ll really like to see.

So, to use a MAF sensor cleaner, all you’ll need is to follow the steps we discussed earlier in the isopropyl alcohol section. However, when it comes to the actual cleaning, you can consider inserting a straw in the nozzle of the spray can to help you spray the interior of the MAF housing.

In case the hot and cold sensor wires are covered with dirt and debris, then you can consider spraying them with several blasts of the MAF cleaner until they’re entirely clean. As always, avoid touching the wires with any object as this can damage them.

Most people have been asking this pressing question. In fact, it’s one of the common questions in most automotive forums. Now, to answer this question in plain words, AVOID using WD-40 as much as possible when cleaning your vehicle’s MAF sensor.

The reason why WD-40 is not recommended is that it tends to leave deposits on the sensor. Remember, WD-40 is a penetrating lubricant that contains some solvents.

Once it’s sprayed on the hot/cold wire sensors, it leaves a coating that alters how the wire sensors respond to airflow when driving. As a result, wrong information is provided to the engine’s Powertrain Control Module that can lead to some of the symptoms we’ve discussed earlier.

The MAF sensor is a very critical part that plays a major role in your car’s drivability. Although some vehicles will allow you to technically drive with a faulty MAF sensor, some, such as those that rely on automatic transmission, will be quite difficult to drive.

With that said, we believe that this guide has provided value when it comes to cleaning a MAF sensor. In case you have any questions regarding the topic, please don’t fail to share them in the comment section below.